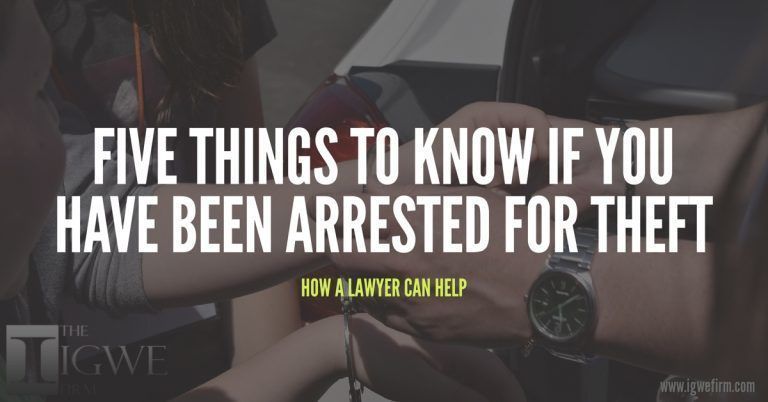 Five Things To Know If You Have Been Arrested For Theft: How A Lawyer Can Help

If you have been arrested for theft in the state of Pennsylvania, you need help, and the attorneys at The Igwe Firm can help. There are many different types of theft, and different states and jurisdictions define theft in different ways, but in all cases if the police have arrested you and charged you with taking something that was not yours, then you need the help of an experienced lawyer to clear your name. The consequences of being found guilty of theft depend largely upon the value of the item that was stolen, as well as on whether you have previously been convicted of a similar crime, but no matter how small or seemingly insignificant, or for whatever reason a crime may have been committed, a conviction can result in jail time, a criminal record, having to pay fines, and more. Call The Igwe Firm at your first opportunity for help preparing a defense designed to prove your innocence or minimize the impact of the charges.

In Pennsylvania, theft charges can mean many things and can take many forms. Here are five things you should know if you’ve been arrested for theft:

As experienced criminal defense attorneys, the professionals at The Igwe Firm will meet with you as quickly as possible, asking you for details about your situation and answering all of your questions in order to be sure that we have a good understanding of your case. We will look closely at all of the evidence against you in order to be sure that your rights have not been violated and that you get a defense designed to provide you with the best possible outcome.