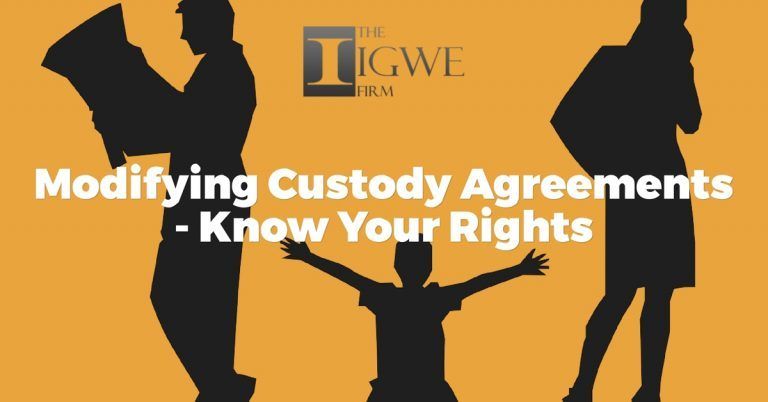 When a divorcing couple has children, custody is one of the most challenging and potentially contentious aspects of the process. In the state of Pennsylvania, custody is handled as a separate issue in the same way that equitable distribution and child support are. The state has placed what is in the best interests of the child as the highest priority for determining who gets custody and how it is divided, and much of the decision is based on whether each parent will do enough to foster a positive relationship with the other. Once a custody arrangement is resolved, it is not set in stone – either party can request a modification of the custody agreement at any time. At the Igwe Firm, we understand that modifying custody agreements can be a difficult process, whether you are the parent who is trying to make a change or the parent who has been told that their former spouse is altering the standing arrangement. We are committed to helping you understand your rights and helping you achieve the results that you hope for.

There are a few ways that a modification of an existing custody agreement can be accomplished. There is no requirement that the court approves a revised arrangement that both parties agree to: this is known as a stipulated modification. The problem with a stipulated modification is that it has no legal standing, so even if both parties agree to the change that has been made, either parent can later renege on their decision and return the agreement to what was initially approved by the court. For this reason, if you want to make a change it is a good idea to have it done legally, and recorded in court.

A court-ordered modification of a custody agreement is accomplished by filing a motion requesting the change. Generally speaking, the court does not automatically grant a modification; the requesting parent needs to show that there has been a “substantial change” in their circumstances that spurred the request. Though a change is not legally required, the court tends to take a dim view of requests made without a change in circumstances, if for no other reason that without a valid reason for the change the court system would find itself constantly having to consider revising orders based on a parent’s dissatisfaction with the original agreement.